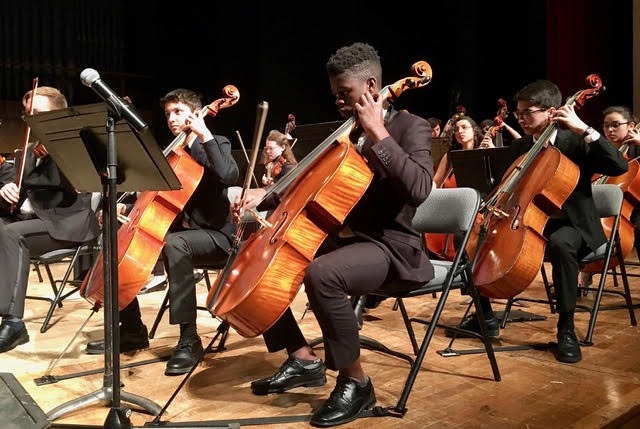 Grand Falls, NB:  The New Brunswick Youth Orchestra will be Inspiring Excellence in Grand Falls this coming weekend, as it kicks off to its 2019-2020 season. The concert, which takes place on Sunday, October 20, marks the third time the 80-member orchestra has performed in the community.

“We are so happy to be performing in Grand Falls once again, and, this time, for our first show of the season,” says Ken MacLeod, CEO of the NBYO. “This is not only an opportunity for the NBYO to showcase its talented young musicians, but for the community to enjoy great music and, once again,  experience and celebrate the enormous talent that exists in this province.”

The last time the NBYO performed in Grand Falls was in 2017. The orchestra visited area schools as part of its Canada 150 celebration activities.

This year, the NBYO has two area musicians playing with the orchestra. Madison Mulherin is a violinist from Grand Falls, and Aaron Halpine, who is making his debut with the NBYO, is a cellist from Tilley.

With a total of six performance dates through to March 2019, the NBYO will also be visiting Tracadie in November, Fredericton in January, Moncton and Charlottetown in February, and Saint John in March, for its season finale.  Then, on Canada Day weekend, it will perform at the annual Pops NB event in Moncton.

NBYO Music Director and Conductor, Tony Delgado, says this season, concertgoers will hear some fantastic classical pieces as well as a fun and familiar contemporary piece.

“I think the audience will be surprised by the range of music we’ll be playing, and by the skill of our talented young musicians,” Says Delgado. “This year’s musical programme offers something for everyone, including a fun and unique performance of ‘Bohemian Rhapsody, by the rock band, Queen.”

The NBYO’s Grand Falls concert takes place at 2 pm, Sunday, October 20, at the Auditorium Richelieu, 215 Guimont Rd, Grand Falls. Tickets are available at the Jean Coutu in Grand Falls and Edmundston, and at the door on concert day.

The New Brunswick Youth Orchestra is one of the most innovative and distinguished youth orchestras in Canada, and features some of the province’s most talented young musicians. Its mission is to inspire children and youth to achieve their full potential through learning and performing orchestral music. The NBYO has performed in some of the world’s great concert halls, including Carnegie Hall in New York, The Forbidden City Concert Hall in Beijing, China and the Musikverein, the home stage of the Vienna Philharmonic Orchestra, in Vienna, Austria. In 2011, the Orchestra was awarded first place in the category of Symphony Orchestra at the Summa Cum Laude International Youth Music Festival in Vienna, Austria.  It has six CD recordings and has received an East Coast Music Award for best classical recording.  In addition to performing with a high level of excellence Auditorium Richelieu, the Orchestra continues to commission original works, collaborate with guest conductors and performers, and tour both in New Brunswick, Canada and internationally. For more information about the orchestra, members and upcoming events across the province, visit www.nbyo-ojnb.com