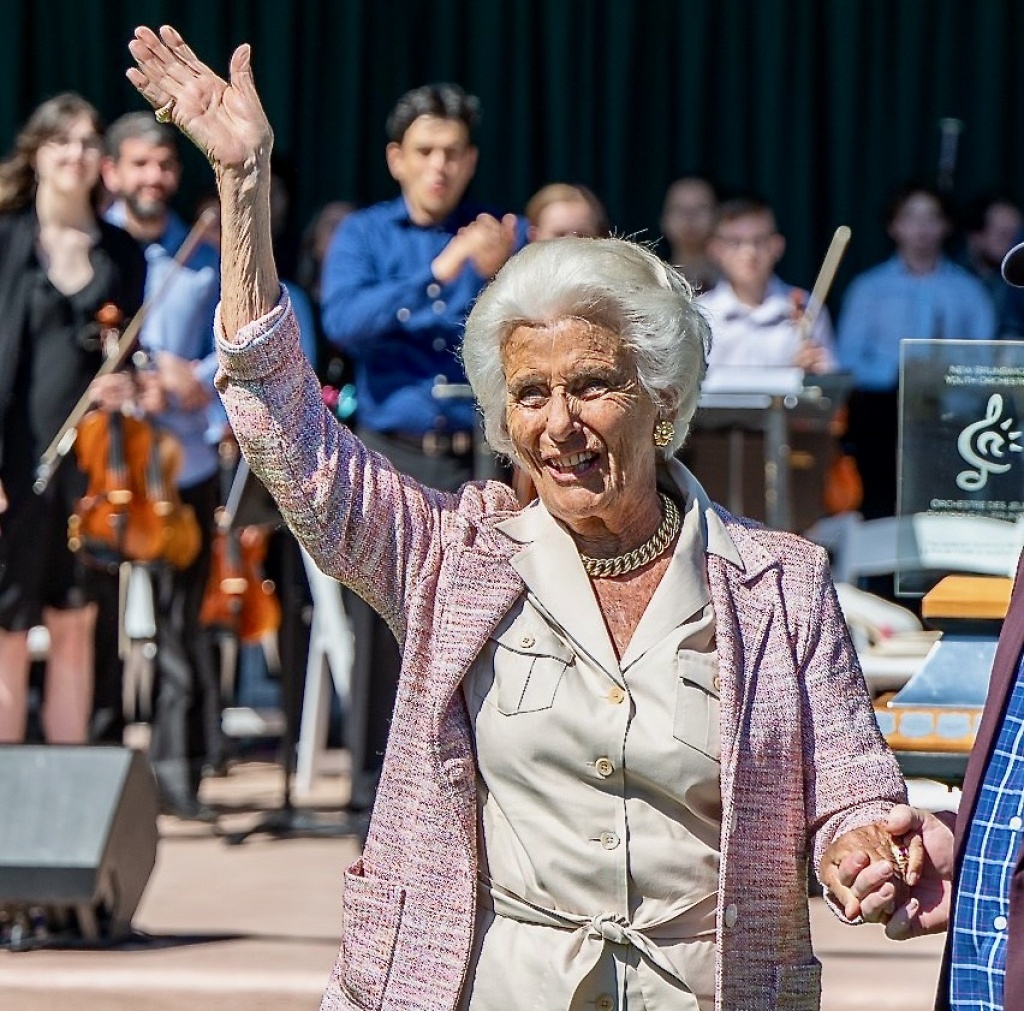 June 4, St. Andrews, New Brunswick: It is with great honour and distinction that the New Brunswick Youth Orchestra (NBYO) announces Mrs. Lucinda Flemer, Founder of Kingsbrae Garden and KIRA Amphitheatre as recipient of the 2022 Lieutenant Governor’s NBYO Award. The Award was presented during a concert at the KIRA Amphitheatre.

The Lieutenant Governor’s NBYO Award is presented annually to deserving musicians, instructors, members, patrons or volunteers from across the province. The award recognizes exemplary leadership and sustained, significant contribution to the development of the orchestra and the musical development of youth and the orchestral community in New Brunswick.

“Mrs. Lucinda Flemer has dedicated a lifetime to improving her community and is inspired by the movement of leveraging music to foster social change. She has supported the development and the promotion of music programs that benefit New Brunswick’s youth.” said the Honourable Brenda L. Murphy, Lieutenant Governor of New Brunswick. “Lucinda, thank you for allowing young people to dream bigger and to reach higher through your vision and generosity.”

Mrs. Lucinda Flemer is a vocal ambassador for the students, NBYO and Sistema NB. She felt the need to advance the students’ performance experience by showcasing their talents. Mrs. Flemer hosted a number of concerts, featuring Sistema NB and the NBYO, on a temporary stage at Kingsbrae Garden. As students advanced in their musicianship, she felt her hosting venue should grow to reflect their progress. This motivated her to construct a world class performing arts venue. With the help of the Province of New Brunswick, and Government of Canada, Mrs. Flemer personally created the KIRA Amphitheatre which musicians are labelling the top outdoor venue in Atlantic Canada.

“Mrs. Flemer is a friend, supporter and partner of the NBYO.” said Ken MacLeod, NBYO President and CEO. “She is a believer in the power of music and the orchestra to create social change. And she is dedicated to the idea that all children have talent and that our responsibility, as a society, is to make sure that all children have opportunity, that none are left out.”

“She has opened the door for many musicians to showcase their talents and we are pleased to honour her unwavering contribution.” continued MacLeod.

About the Lieutenant Governor’s NBYO Award

The Award is presented each year during the NBYO concert season to deserving musicians, instructors, members, patrons or volunteers from across the province and beyond, following nominations and upon the recommendation of the NBYO Awards Committee.  The Award will be presented each year to a maximum of three individuals or organizations, having made a sustained and significant contribution to the NBYO mission, the musical development of youth, and/or the orchestral community in New Brunswick.

The mission of the New Brunswick Youth Orchestra is to inspire children and youth to achieve their full potential through learning and performing orchestral music. The NBYO is one of the most innovative and distinguished youth orchestras in Canada, and features some of the province’s most talented young musicians.

Sistema NB, a program of the NBYO, began in 2009, and provides access to music education and the orchestra to children and youth who otherwise might not have opportunity.  Sistema NB operates 9 centers, in Moncton, Saint John, Richibucto, Edmundston, Miramichi, Hillsborough, Tracadie, the Elsipogtog First Nation, and Fredericton and engages more than 1100 children daily.  Sistema NB is the largest program of its kind in Canada and a recognized leader not only at home, but also internationally.

For more information about NBYO, Sistema NB and upcoming events across the province, visit www.NBYO-ojnb.com or Sistema | Making a difference through music. (sistemanb.ca)