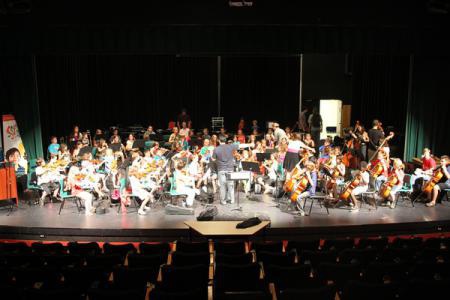 MONCTON, NB –After a very successful launch at Beaverbrook School in Moncton, Sistema New Brunswick announced today that it will open two new centres in co-operation with local school districts in Saint John and Richibucto in September 2011. The announcement was made by Ken MacLeod, president of the board of the New Brunswick Youth Orchestra, the organization that founded and manages Sistema New Brunswick.

MONCTON, NB –After a very successful launch at Beaverbrook School in Moncton, Sistema New Brunswick announced today that it will open two new centres in co-operation with local school districts in Saint John and Richibucto in September 2011. The announcement was made by Ken MacLeod, president of the board of the New Brunswick Youth Orchestra, the organization that founded and manages Sistema New Brunswick.

“The new centres are scheduled for School District 8’s Hazen White-St. Francis School in Saint John and School District 11’s École Soleil Levant in Richibucto,” MacLeod said. “Both centres will mirror the successful prototype centre at Beaverbrook School in Moncton. When these two centres open, 250 students will be benefiting from the Sistema New Brunswick program in the province – 150 in Moncton, and 50 each in Saint John and Richibucto.”

Modelled on an internationally renowned Venezuelan program, Sistema New Brunswick is designed to influence children through music, to foster positive values such as discipline, teamwork, confidence and self-esteem, and to inspire in children a sense of hope, joy and the aspiration to succeed. The program accepts children from the early grades of elementary school and brings them together for three hours per day every weekday afternoon.

“The children begin with choral and rhythm work,” MacLeod said. “Through what’s called a ‘paper orchestra’, they build an instrument they would like to play. Following that, we introduce string instruments – violin, viola, cello and bass – within the first month. We also provide after-school nutrition.”

“The best thing is that all of this is done at no cost to the children or their families,” he said. “Their only commitment is to attend every day and play in the orchestra. We’ve seen some amazing results in Moncton. The children are progressing rapidly with their instruments but there are other benefits -- better behaviour, better marks and focus, as well as renewed passion for learning. There’s been a lot of demand for the program to expand and we’re pleased to see that happening.”

The program is funded by the Province of New Brunswick, who announced a $1.84-million investment in August, as well as by a number of corporate and individual sponsors. Sistema New Brunswick will undertake a fundraising campaign to match the provincial government’s funding. This will provide stable, long-term funding for the program.

A five-year strategic plan is in place that will see four centres open by 2014. With today’s announcement, three of those four centres have become a reality. “We are moving ahead with determination because we see the difference the program is making in so many lives,” MacLeod said.

“Sistema New Brunswick targets those children who are often left out, those who may not otherwise have an opportunity to explore the world of music,” said Susan Tipper, superintendant of School District 8 in the Saint John area. “The discipline learned and required to play an instrument is transferrable to the classroom, and I strongly believe that we will see positive changes in behaviour and academic achievement for many of the children participating. How could anyone say “No!” to providing our youth with such an opportunity?”

The superintendant of School District 11 for the Richibucto area was equally as enthusiastic. “This program is an inspiring new approach in our area,” said Gérald Richard. “Students will benefit from an unprecedented musical learning experience. Thanks to this exciting new program, students will discover the cultural richness that comes from a common interest in music. School District 11 is proud to have Sistema New Brunswick as a valued partner in education.”

“We’re looking forward to making a marked, positive and pro-active difference in the communities we’re announcing today for expansion,” MacLeod said. “That’s why we target areas where the program can make the most difference for children who are often left out. Both school districts we’re expanding into were very anxious to get us to establish there. That, in itself, is a testament to the results we’re seeing in our Moncton centre and the excellent reputation Sistema New Brunswick has developed in only a few short months.”

School districts participating in Sistema New Brunswick provide space for the program, as well as transportation for the children. The districts also help identify the students who would most benefit from participation in the program.

Founded in 1965, the mission of the New Brunswick Youth Orchestra (NBYO) is to inspire excellence in children and youth through learning and performing orchestral music. Some senior musicians will further their musical studies at universities and conservatories, and some may go on to teach and to perform as professional musicians. All will have their lives enriched through their participation in the NBYO and will become appreciative audiences of – and contributors to – the creative and performing arts. The NBYO has approximately 80 young musicians who are residents of New Brunswick or are attending school or university in the province.

In the past eight years, the NBYO has earned an enviable reputation. They performed at Carnegie Hall in New York, Auditorium Paganini in Parma, Italy, and the Forbidden City Concert Hall in Beijing, China. They recorded three CDs, one of which won “Best Classical Recording” at the 2008 East Coast Music Awards.