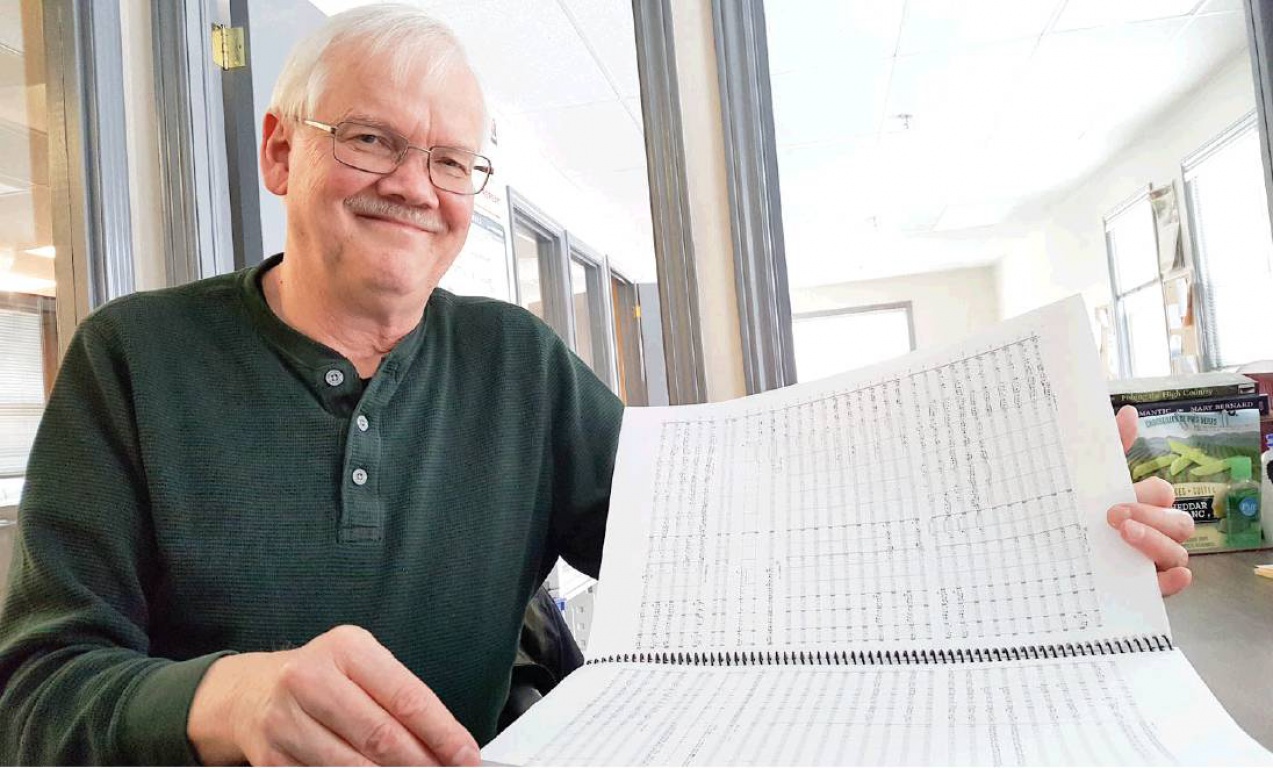 Sam Arnold holds up the score from his new piece of music, Wolastoq Fantasia, which recently premièred in Saint John. PHOTO: JOCELYN TURNER/BUGLE-OBSERVER

A Woodstock-based composer and writer recently premièred his latest music with the New Brunswick Youth Orchestra and now, he’s set to receive a very prestigious award.

Sam Arnold, a former music teacher who taught at Woodstock High School and in Hartland, recently finished a large score of music titled Wolastoq Fantasia, a 30-minute piece that has about 23 instrumental parts and features a variety of different folk songs within the piece itself.

He also wrote a piece about the Keenan Bridge, which many believe to be haunted.

“I’ve written other smaller pieces, but this piece here [Wolastoq Fantasia]  is quite different because I am also rather interested in environmental issues. It’s something that’s really important to me and I’ve been quite involved with that,” he said. “I thought, well, I’d like to do a piece where I can combine the two ... I’ve always loved rivers. Ever since I was a kid.”

Arnold said for his new piece, which he started working on about 10 years ago, he wanted to write about the St. John River. He said he had lived along it while living in Saint John and now while living in Woodstock. He said it’s one of those rivers that he thinks “is just beautiful.”

“I started doing a little research and the more I researched it, the more interested I became,” he said.“So I wrote it.”

For the piece, Arnold said he made the music into a bit of a story. He said he wanted to follow the river from northern Maine’s Baker Lake – although that’s not the source of the river, he added, but it is used as a starting point.

“I know some people, Woodstock people, and they paddle from there and I had never been there myself [but they had] taken pictures,” he said.

Another unique aspect of the music piece is that it includes a slideshow, which features pictures and even a drone video of the river and accompanies the music.

Arnold said he even took pictures from a canoe trip with his brother along the river.

“There’s 16 traditional folk songs in this,” he said of the piece.

“This piece, I’m calling it a super medley because it has so many changes. I couldn’t even count them.”

In addition to the traditional songs within the piece, Arnold said the musical score also includes some of his own themes that listeners can hear throughout the piece.

“It took years [to create],” he said of the music.

“First, I started with the research. The research itself took quite a while. And then, there’s some indigenous songs in there.”

Arnold explained the songs were originally recorded on wax cylinders “going way, way back before records. 1913.” The recordings are of indigenous people singing the songs that Arnold got a copy of. He said he listened to about eight songs and he picked out the ones that appealed to him musically.

“When I finally started writing it and putting it together that [took], I would say, a couple of years.

“But it just flows, it never stops.”

He said the song is set more than 100 years ago, something he did specifically.

“I wanted it before there were any dams, so the river was free-flowing and also the folk songs. Folk songs have become common domain after 100 years or something like that, so I know all the songs ... had been around that long at least,” he said.

“There’s songs from all three of the main cultures, so there’s indigenous songs, Acadian songs and anglophone songs.”

Arnold said he spoke to the conductor of the New Brunswick Youth Orchestra Antonio ‘Tony’ Delgado in 2016 and asked him if he would be interested in letting the orchestra première the piece to which Arnold said the conductor was happy to do on the condition that he was able to approve the music.

The piece premièred in Saint John on Sunday, Jan. 13, and will be played once again, this time in Fredericton in February, followed by another performance in Moncton.

“It was wonderful, absolutely wonderful,” said Arnold about hearing the music played for the first time before an audience. “It was everything I expected it to be ... It was almost perfect.”

Arnold said during the Sunday performance, some recordings of the music were made, adding he knows they’re already floating around and being listened to.

At the Fredericton performance next month, Arnold will be honoured with the Lieutenant Governor’s Award.

“It originally was supposed to happen last year, but then it didn’t because I couldn’t come,” he said. “I  had ... a concert. I had a conflict.”

When asked about receiving the award during only the second concert at which his latest piece will be played, he said it’s an honour.

“She and her husband [Jocelyne Roy Vienneau] were there and I could tell they were [impressed],” he said, adding the couple were sitting nearby.

“When we had the titles, the text was translated [in the slideshow]. We made it bilingual. Plus the fact there were five or six Acadian songs.”

Arnold said he appreciates the award he’s set to receive and is excited for the next performance.

The Wolastoq Fantasia will be performed again February 10 at The Playhouse in Fredericton. The concert begins at 2:00 PM.