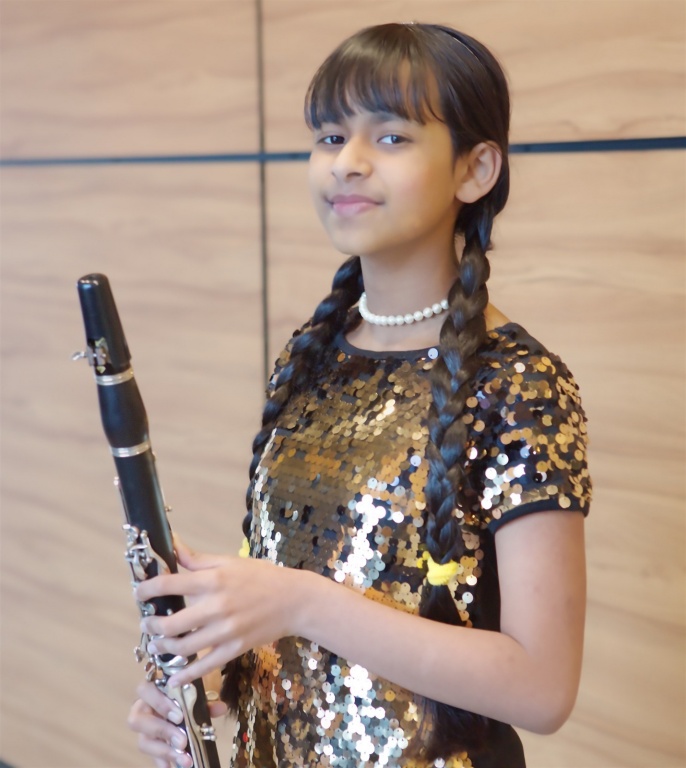 Shinie Wagaarachchi was all smiles after winning an international clarinet competition, but says the real joy is
knowing that all those hours of hard work paid off.

"Just knowing that I won told me that I did a good job. But even if I hadn't won, I would have been happy anyway because of all the work I put into it," said Shinie, who is a 12-year-old clarinetist with the Sistema New Brunswick program, which provides after-school music education to more than 1,100 children in nine locations around the province.

Shinie is the daughter of Susith Wagaarachchi and Nadeeka Kothalawala, who came to Canada from Sri Lanka in 2007. Shinie was born in Edmonton and the family now lives in Moncton. She joined the Sistema program four years ago, practising at home and performing in concerts. She entered the 2021 Asian International Youth Clarinet Competition, placing first in the 11-13 age category with a score of 9.7 out of 10 by a panel of six international judges.

Shinie, who is a Grade 6 student at l'Ecole Le Mascaret in Moncton, entered the competition virtually with recorded performances that were sent to the judges. The first was a solo and the second was with piano accompaniment. "I had to start by bowing to the crowd, but there was no crowd, just a camera," she said.

For the final, she performed the Krama Concerto Op. 36, First Movement, in front of a camera at Central United Church with Moncton pianist James Coghlin.

Moncton Sistema director Jonathan Astley said competing virtually is different than performing in front of an audience, and giving the judges a video means they can rewind and replay as much as they want. He said her score of 9.7 was beaten by only one other competitor in a higher age bracket, showing that she is playing at a university level.

"I knew I was good, but I didn't know I was that good,” Shinie said. "The main thing is that you have to blend in with all the instruments so they don't hear you, only you. You need to blend in.” As for the future, she said: "I want to play music and make people happy."

Ken MacLeod, CEO of the New Brunswick Youth Orchestra and Sistema NB, said Shinie's win is being celebrated because it shines a positive light on a program that gives children a chance to shine.

“All kids have talent but not all kids have opportunity," said MacLeod. "If we can provide opportunity and good, caring teachers, the kids can shine at the highest levels."

MacLeod said there are hundreds of students like Shiney who go to Sistema class for three hours after school each day and practise at home because they want to improve their skills. He said there is no charge for participation.

"By design, we want to help kids who would otherwise be left out and wouldn't have the opportunity. They still have to do the hard work, but they are guided by competent, caring teachers, every day after school."

MacLeod said the Sistema program was able to carry on through the COVID-19 pandemic by offering online classes and individual lessons to students at home.

"Because we are a social program, keeping contact with our kids and families was really important. Typically, kids who are left out of society are at even more risk during a time like COVID-19," MacLeod said. "The issues that kids face on a regular basis are hard enough, and multiplied 10 times during COVID."

“At the very beginning, we decided we that we wouldn’t just try to hang on during COVID but advance our students. It set the direction, the tone, the objective that we weren't going to be content to just hang on by our fingernails," MacLeod said. "We were doing virtual classes, but as soon as we were able to return to in-person we could see the progress they had made."